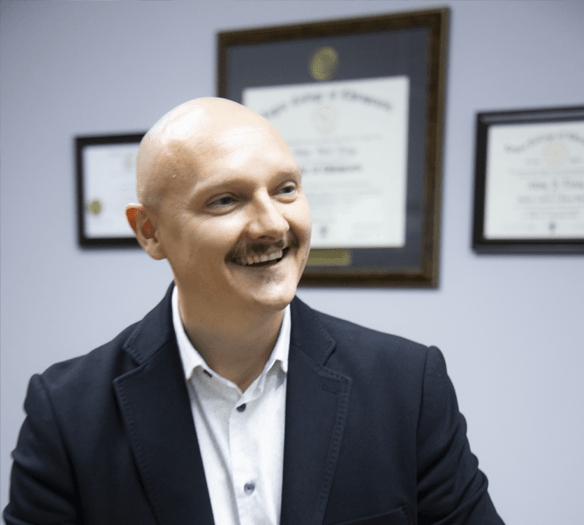 Dr. Adam Elsey, a Missouri native, graduated from Logan College of Chiropractic on December 18th 2004 in Chesterfield, MO where he received his Doctorate in Chiropractic Medicine and Bachelors of Science in Human Biology. Dr. Elsey realized his passion for chiropractic at an early age after losing his mother to cancer. He has now dedicated his practice to helping patients achieve optimal health through chiropractic care. Dr. Elsey took his first job as a doctor of chiropractic in Charleston, SC, where he practiced for 2 years. He then returned to St. Louis, MO, where he opened his Hazelwood practice in 2007.

Dr. Adam Elsey works very closely with the medical and legal community, in the treatment of musculoskeletal/whiplash type injury conditions. He has been called to testify as an expert witness within the courts for car accident injury cases. He has also worked closely with insurance adjusters and attorneys to help resolve difficult injury cases. Dr. Adam Elsey is board certified in Chiropractic and Physiotherapy. He has also been an active member of the Missouri Chiropractic Association since 2007.

When Dr. Elsey is not caring for his patients he enjoys spending time with his wife Emily, his son Abram and his daughter Alice. His hobbies include: performing in competitive triathlon events, snow skiing, basketball, enjoying family and friend time, and traveling.

When treating with Dr. Elsey and his team, it is evident that they put the patients health first and care for patients like members of the family.  Dr. Elsey has helped thousands achieve a better quality of life. If you desire a doctor whose first priority is his patients, then look no further than Dr. Adam Elsey and the staff of North County Pain Relief Center: call now at (314)731-4201.